BY C.L. HARMON
PUBLISHER
Progress pushes forward in Mannford with new construction going up in the new business district west of town. The new American Heritage Bank building has taken form and looks to be coming along well.
“This year we have broke ground on the new American Heritage Bank, broke ground on a 40 unit senior housing project, broke ground on the CNG fuel station and have resurfaced/overlaid Aspen Birch Greenwood Dogwood Greenbrier Circle, Glendale Circle and Gardenia,” Mayor Tyler Buttram said.
The largest of the projects currently under way is the senior housing project. it is on schedule with the pad poured and the recent completion of the concrete safe room. Residents can watch the daily progress as they drive by. The frame work is the next step and it begins next week. Completion is scheduled for next summer, Buttram said. It is a 40 unit complex, mostly single bedroom units. However, there will be a few two bedroom units. The $5 million, 34,000 square foot project is at no cost to the public and is being funded through the accumulation of HUD (Housing & Urban Development) disaster relief money. In addition, a sidewalk will be constructed connecting the complex to the senior center.
The CNG station is also nearing completion. Workers are finalizing the electrical and various other component installation and the pumps are set. Buttram said that he expects it should be operational within a month.
“This is a very exciting time in Mannford right now. We have a lot of construction going on both commercial and residential. We also have lots of things in the works which we will hopefully get to announce possibly as soon as the Chamber Banquet in January,” Buttram said. 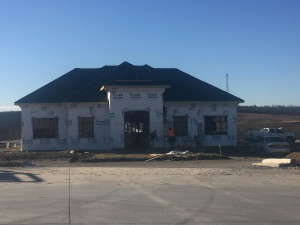 The expected completion date will be January 15th, expected opening day February 1st 2016. Lobby services will be the same as new Cleveland motor bank. Full service with the exception of loans. Loans will continue to be made at AHB’s current location in Mannford. 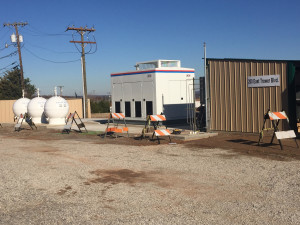