A Hell On Wheels Hit & Run Leads to Local Arrest 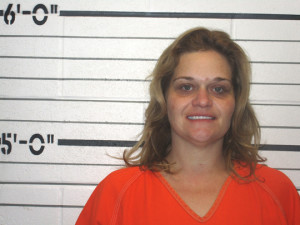 BY C.L. HARMON
PUBLISHER
Hell hath no fury like a woman scorned, the old adage goes. Add a little alcohol to her and a piece of machinery and well…hell better watch out too. A recent incident in Mannford once again adds credence to the old saying.
When Mannford PD Officer Don Caffey arrived on scene at the Dollar General store parking lot on November 29, there was a small crowd gathered around a man who was laying on the ground attempting to help him. When asked by Caffey what the situation was, the man responded that he was in love with an alcoholic who gets argumentative when intoxicated.
The man then advised that he and his girlfriend Shay Alissa Ward were in the midst of an argument when they pulled into the parking space in front of the store. Instead of continuing the argument, the man decided to exit the vehicle once it came to a stop. Apparently however, Ward was not finished with the argument, according to a statement from a witness who told police Ward was screaming at the man as he was attempting to exit the vehicle. The witness went on to say that Ward then placed the car in reverse, backed up. running him over and then sped out of the parking lot.
After being checked out by medical personnel, the man refused ambulance transport to a hospital. So Caffey took the man to his residence in Rolling Oaks Trailer Park and dropped him there.
A short time later Caffey was notified by another officer that a van matching the description of the one the man had been riding in was at the residence where he has dropped the man a short time earlier. Caffey made contact with Ward, who claimed multiple times that she had done nothing wrong. he did, however, later state that she did nor know she had run over her boyfriend
While preparing to arrest Ward, the man asked to speak to Caffey. He informed him that he loved Ward and if forced to testify, he would lie to the judge to protect her, according to the report.
Ward was arrested for Assault & Battery with a Dangerous Weapon, Failure to Stop at an Injury accident and Interference of an Authorized Agent.