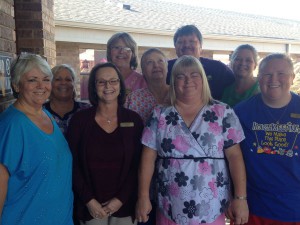 Cimarron Pointe staff pose for a photo to celebrate the success of the state survey.

BY GARY GOLDBERG
In something rarely seen in nursing homes in Oklahoma, Mannford’s Cimarron Pointe Care Center received no “tags” during the annual survey by the Oklahoma State Department of Health. Tags are corrective actions giving out when negative issues arise. Overall the survey found zero deficiencies in nursing and only one deficiency overall having to do with the ice machine.
The State Department of Health survey is a comprehensive examination of a nursing home’s readiness to serve their residents. Some of the areas where the State Department of Health looked at during this three-day examination included reviewing the home’s policies on abuse, infection control, smoking, maintenance, housekeeping, complaints, and fire and disaster plan policy to name a few. In addition the state looks at how the nursing staff operates, how medications are dispensed and how residents are treated on a daily basis.
The State Department of Health does not announce when they are coming to a nursing facility in advance, so no heads up was given. Therefore special consideration wasn’t given by Cimarron Pointe simply because the Department of Health was coming. Instead, what was the normal operation of the facility is what was surveyed.
In addition to comprehensive and extensive interviews with the administration and staff, interviews are also conducted with residents. The results of those interviews showed the residents complimented their overall care, the quality, preparation of choice of food, and the cleanliness and maintenance of the whole facility.
I had the opportunity to interview two residents. The first was Freda Huelsenbeck. Freda lived with her son in Sand Springs before coming to Cimarron Pointe where she has lived for five years. She pointed out that she had visited other nursing homes in the past but never found a facility that smells as good as Cimarron Pointe. She complimented the staff on how the facility fulfills her needs and keeps the place clean. She especially complimented Administrator Tammy Dawes on how well Tammy treats everyone, including residents and staff.
My second interview was with Perry Robinson who has called Cimarron Pointe home for one and a half years. Perry is from Henryetta. He said he lived in another nursing home before Cimarron Pointe but that one didn’t compare with how good this one was. He said he could have stayed closer to Henryetta but another resident at Cimarron Point that he knew recommended that he come here and he’s glad he did. He said the food was excellent and they allow seconds if he’s still hungry. He also complimented the cleanliness of the facility and the attention the staff pays to him. His final compliment was also for Administrator Dawes on how well she manages the staff.
When I shared these comments with Tammy she seemed almost embarrassed by them and quickly deflected away from herself and towards her staff. “I deeply appreciate the hard work and dedication of these wonderful people,” she said. “There compassion and caring attitude is noticed every day. This staff truly cares about every resident living with us,” concluded Dawes.
Tammy also mentioned that many changes have occurred since she arrived in January of 2014. Included in those changes was a new Physician Dr. Oliver Cerqueira, a new Director of Nursing Sharon Linder and continued excellent work by Dietitian Sharon Johnson. Tammy said these members of the staff are directly attributable to the successful survey.
Mannford should be very proud of the exemplary nursing facility we have serving our community and the great results of the Oklahoma State Department of Health survey. Many of the seventy two employees working at Cimarron Pointe are local citizens. The great job they do reflects on the the whole community.